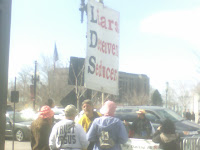 Today I had the opportunity to attend a session of General Conference of the Church of Jesus Christ of Latter-day Saints. As usual, there were protesters outside the Conference Center preaching about how latter-day saints are deceived and need to repent, etc. The picture is a photo that I took today of one of the street preachers. I apologize for the quality; my camera phone was the only camera I had with me and the sun made it difficult to see what I was shooting. In this picture you'll see that the preacher is holding a sign that spells out the acronym "LDS" using the words "Liars Deceivers Seducers".

I am not aware of any major religious conference of any other faith that is regularly protested in this way. It is understandable why people of my faith sometimes feel offended when such preachers cry that we are going to hell or that we are not Christian. Indeed, we worship the Lord Jesus Christ and sometimes find it difficult to understand why others would think we are not Christian. A sentence I have heard referring to this kind of situation is, "I don't know why they have to push their religion on others."

In this blog post I would like to defend the right of these street preachers to preach as they do, and explain why I feel that way.

I would first of all like to clarify that I think that shouting that people are going to hell, etc. as they walk by on the street is probably not a very effective way to proselyte. However, freedom of speech and freedom of religions are some of the most fundamental and revered rights upon which the United States of America is founded. While I don't agree with these protesters' opinions, they have the right to share them. As a missionary for the Church of Jesus Christ of Latter-day Saints, I volunteered full-time for a year and a half to share the message of the gospel of Jesus Christ with whomever would listen. Sometimes people would say that we were trying to push our religion on them, but we didn't see it that way. We were trying to give people the opportunity to learn about it if they wished. It seems to me that it's not really possible to force someone to believe in a religion, is it? At any rate, if I wasn't pushing my religion as a missionary, I don't believe that General Conference protesters are pushing their religion either. As long as their methods of preaching and protest are legal, I think they have the right to speak their minds. Latter-day saints generally treasure freedom of religion wherever it is available around the world.

While I disagree with their doctrines and methods, it seems that the efforts of these street preachers is based in a desire to help people to be saved. They apparently think that we are deceived, misguided people who are on the wrong path. While I believe that the gospel of Jesus Christ as taught in the Church of Jesus Christ of Latter-day Saints is true and correct, I appreciate that these people are apparently concerned for the welfare of my soul. After all, we have many beliefs in common, such as believing that Jesus Christ is the Savior and believing that the Bible is the word of God.

I think that acceptance of the fact that other people can have beliefs and opinions different from mine is a characteristic of being a mature adult. While these street messages are sometimes delivered in an ascerbic manner, and while the doctrine they contain does not accord with what I believe, as far as I have observed I have seen nothing that would overstep the rights that these preachers have to exercise their freedom of speech. I hope that I will always be found reacting to this anti-Mormon preaching in a Christlike way.
Posted by ww at 9:23 PM