...the blog post you've all been waiting for: pictures of the mantis!

If you happened to read this blog post of a couple of weeks ago, you learned that we currently have a pet praying mantis. My dad found her (more like she found him) while he was working and now she lives in a terrarium at our house. As far as mantises go, I think she's pretty good-looking. :) I got out the camera today and took a few photos so you can all see how cool she is. 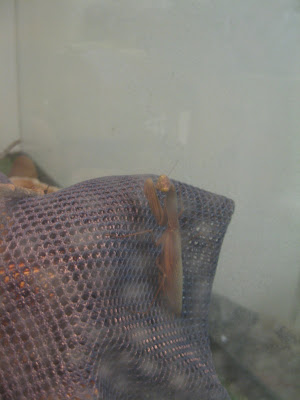 Some things you might be wondering:
Q: What does she eat?
A: Things that move, usually house flies and crickets that we bought at the pet store. We just put the other insects in her cage along with her and she eats them at the appropriate time. It's a pretty good way to use those flies that buzz around the house sometimes, and she seems to like them.

Q: Why is the picture so bad?
A: This is actually the best photo of her that I got. The tank she is living in has a lot of water spots on it, and the macro setting on my camera leaves something to be desired. Please click on the picture to see it in a bigger format.

Q: Why is she brown?
A: Apparently some mantises just come that way. She changes between a creamy brown and a dark brown during the day.

Q: Does she always catch them on the first try?
A: No. It seems to maybe have something to do with how hungry she is. These days she's pretty well fed, so if something happens to walk by, she'll reach for it, but doesn't seem to be really into it.

Q: How do you know she's a female?
A: According to informational websites on mantises, males have eight abdominal segments and females have six. I did count six, but the dead giveaway was when she laid eggs one night at about 1:00 in the morning. My brother came and got me after I had just gotten into bed and said something like, "You might not be interested, depending on how asleep you are, but the mantis is laying eggs right now." I got out of bed and watched the process for the next hour or so. I was really tired the next day but it was worth it. 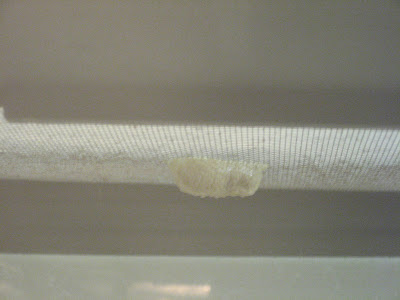 This is a photo of the first egg sac she made. It's about the size of a small walnut, and it's stuck to the wire mesh on the top of the screen over her house. She has laid two more smaller egg sacs since then.

Q: Are you gonna have baby mantises?
A: Unknown. It's possible that she may have mated before she came to us, but she also might have just expelled the eggs because it was time. At any rate, the baby mantises would be most beneficial out in our yard, where they could take care of insect pests, so we will probably put the egg sacs outside and let them hatch (if they will) in the springtime. Which means we may likely never know whether the eggs are viable or not.

Q: Is this the most spoiled praying mantis ever?
A: We are definitely not the first people to keep a mantis as a pet, but she does have a pretty sweet life. Check out this photo of her digs: 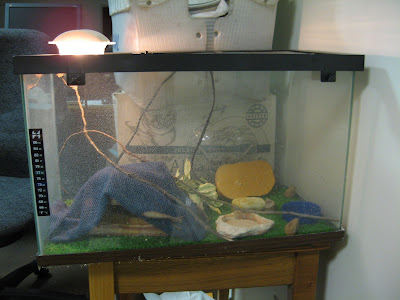 We had this tank as a home for previous pet lizards we had. You can see that she has rocks and branches to climb on, a light for light and heat, an electric hot rock, a little water dish and a blue netting thing that she likes to climb on and hide under. The other things you see in there are pieces of potato and banana that the crickets eat.

Q: Is having a mantis as a pet really as cool as you say?
A: I am not normally a person who has feelings of affection for animals that are not soft and furry. Even things like hamsters and gerbils don't appeal to me that much; I prefer more intelligent animals. But as invertebrates go, this mantis is pretty awesome. She is fun to watch as she climbs around the cage and looks around at what is going on. By observation and by research I have also learned quite a bit about insect anatomy and behavior.

Q: What's her name?
A: My dad never officially named her because we don't expect her to live that long (in the wild she would likely have already frozen by now). But my mom suggested the name "Millie".

Have any more questions about the mantis? Feel free to leave a comment!
Posted by ww at 9:51 PM

Generally speaking, I have no love for insects. Well, a lot of invertebrates in general. However, I do think that mantises are pretty cool. It's a little creepy the way they feel when they walk on your bare skin, but I think they're beautiful creatures.