The newest in language learning.

I just don't get it

How does Dolly Parton play the guitar with those super-long fingernails? If you watch her, you can see that she's really playing, not just moving her hands around like they do sometimes on TV. But if I had fingernails like that and I tried to play, I wouldn't be able to get the fingers in the right position to make the notes sound right. Maybe her playing-with-long-fingernail talent is one explanation for why she has been so popular for so long.
Posted by ww at 11:25 PM 3 comments:

Topics: things I don't get

I had the idea to do this a little while ago so I decided to do it this morning. Basically what I have done is, in graphical form, figure out the amount of pages spent on certain amounts of time in the Book of Mormon. It is my suspicion that the time periods on which the Book of Mormon spends more writing are important time periods to study.

Here's how I did it: I made a spreadsheet that contained one data point for each page in the Book of Mormon. I went through the book and typed in the year at the bottom of each page. When more than one year was featured on a page, I always used the latest year available on that page. Then I graphed the results. The following graph, therefore, shows the amount of pages spent on each time period in the Book of Mormon.

It should be noted that some of the years in the Book of Mormon are estimated, while some are exact calculations. Also, Ether does not have any years listed at the bottom of the page; basically all of the events in the Book of Ether happened before the rest of the Book of Mormon did.  This is the reason for the blank area in the graph between pages 487 and 517.  Years B.C. were plotted as negative numbers and years A.D. were plotted as positive numbers.

Click on the image below to see the graph in larger form. 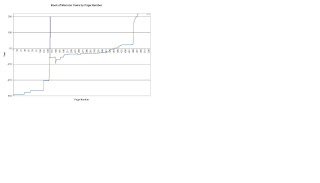 The graph slopes upward, which means that the general organization of accounts in the Book of Mormon is from earlier to later, with a few exceptions.  I also notice that the graph is made of a number of relatively flat areas, meaning that the book focuses on one time period for some pages, then quickly moves to focusing on another time period.

To show how much the Book of Mormon focuses on one time period and then jumps to another period of focus, look at the following graph.  In this graph, I plotted the difference in amount of years between the previous page and the current page.  Therefore, pages that cover a large amount of time have points on the graph that are far from 0 and pages that cover a short amount of time have points closer to 0.  Again, please click on the image below to see the graph in more detail.

In this graph we can see that the line sticks mostly close to the 0 point, meaning that the Book of Mormon, page-by-page, has the trend of covering with more depth certain periods of time, and then quickly moving to cover another period of time in focus.

To me this shows just how carefully the prophets Mormon and Moroni selected the material they were going to put into the Book of Mormon.  They focused mostly on the events that they thought were most important, not giving much attention to the information in between.  I actually didn't expect this graph to be as flat as it is, so this shows me that it is important to focus on the teachings of the entire book. 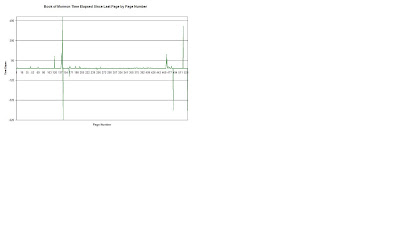 Thanks to Linden's heads-up, I learned about Google Chrome and downloaded it pretty soon after it became available.

If you don't want to read the rest of my review, here's the short version: Chrome is great, but I'm not quite ready to give up Firefox completely just yet.

The pros of Google Chrome:
The promises are true. I tried it out on a couple of pages that usually take a long time to load and they loaded SIGNIFICANTLY faster.
Also, when one tab crashes, it doesn't take the whole computer down with it. Just close the tab and pretty soon the memory will catch up and everything will be fine. Pretty sweet.
I am relieved to see that it loads the website that I work for as designed. So I don't have to do any redesigning for now. Phew!
The developers of Google Chrome rightly realized that tabs belong at the top of the window and the overall look is well-designed, if spartan.

The cons of Google Chrome:
It's the little things. For one thing, I miss the "Undo Close Tab" choice that comes up when you right-click on the tabs in Firefox. I use that all the time.
Also (and this might be a remnant of my days of being a Windows 3.11 user) I often close windows by double-clicking on the icon in the upper left corner. Since Chrome hides this icon you can't close the window that way. I find myself doing a little "oh yeah" and moving the mouse over to the right side of the window to click on the X.
I have actually seen it load one page wrong, but that's not actually a big deal, since this page doesn't work all that well in Firefox either. (I know a lot of people use Internet Exploder, but tsk tsk.)
Unfortunately, the memory savings aren't enough to allow me to load ALL the tabs I want at the same time. But this has a lot to do with the fact that the old Inspiron laptop isn't as young as it used to be.
Shockwave player doesn't seem to work perfectly in Chrome. Not sure if this is a Chrome problem or a Shockwave problem.

So, in summary, I like Chrome, and it's already got a place in my Quick Launch. But I haven't found that I could switch over to Chrome exclusively yet. I still have to use Firefox and *gulp* even IE for some tasks.
Posted by ww at 9:33 PM 3 comments: