A little tip for guys who send me messages online


If you want to make a good impression on me, I suggest that you don't:

1. Tell me what subfield of linguistics I should study.  Having written a dissertation on second language phonology is kind of proof that I've already chosen that one.  And I really don't like it when people tell me what they think I should do unsolicited.  How about this question instead: "Why did you choose that field?  What do you find interesting about it?"

2. Make up garbage, unoriginal theories about linguistics, based on your own strange ideas about languages and language learning.  Know-it-alls are not attractive, especially because I have my own know-it-all tendencies.  How about this instead: "I've always thought such-and-such, but I don't know much about linguistics.  What have you studied on that topic?"

To the guy who did both of these things in as many messages to me: major turnoff.
Posted by ww at 11:55 PM 6 comments:

Dear Republican delegates,
A little friendly advice, since it seems like many of you want to actually have a Republican president in office again.  I realize there are many of you out there who don't want a Mormon president, no matter what.  But you should ask yourselves -- are you willing to lose the election over it?

As all the pundits are saying, Gingrich seems to be collecting votes from anyone who doesn't want a Mormon president.  But imagine Gingrich against Obama.  Gingrich is much less TV-friendly (let's face it, he's not particularly good-looking) and already, criticisms of his handling of his personal life and moral behavior are coming under question.  In addition, Gingrich's politics are far right, which doesn't usually play well in the main presidential election where voters tend to lean moderate instead of extreme.  Next to our smooth, family-man, progressive incumbent president, I don't think Gingrich will end up the victor.

Romney, on the other hand, is relatively good-looking and has already established himself as moderate in the sense that he is conservative on some issues and liberal on others.  Such a moderate platform will appeal more to the general public, who drives the electoral college.

So if your top priority is to not have a Mormon as president, go with Gingrich, and get ready for an Obama re-election.  If you want a Republican in office, though, Romney's your man as far as I can tell.  Don't let prejudice prevent you from achieving your main goal.

(Just in case you're wondering where I'm coming from, I'm not affiliated with any party, but have generally conservative leanings on many domestic issues.)

I haven't blogged in months (as you can see by the date on my previous post) and that's mostly because I didn't feel like I had anything to say, at least not anything to say to the audience on the interwebs.  And I'm still not sure that I have anything to say, but I am going to tell you about my only-semi-official boycott of McDonald's.

First of all, I want to make it clear that I don't have anything political against McDonald's.  My main complaint is that their food is generally poor quality.  If I want a burger, there are lots of other restaurants out there where I can get a better burger.  And over the years some items they have offered have been incredibly unhealthy (such as McGriddle and, more recently, their oatmeal).  Which means that I am not highly motivated to go there...

Which leads me to the "boycott".  I don't eat at McDonald's.  It's a long-standing tradition.

The last time I can remember purchasing food at McDonald's is when I was in high school on our choir tour to California.  We pulled into a town at night in our choir bus for a quick food and wash-yourself-a-bit-in-the-bathroom visit.  As far as I know (with one limited experience I'll tell you about later), I have not purchased food at McDonald's since then.  So that would be an estimated 17 years that I have gone without Mickey D's.  I have eaten a couple of burgers during that time that my dad brought home when they were having a sale or something.  But during that time I have not stepped foot into a McDonald's restaurant or purchased anything there as far as I can remember.  And after it had been a time, it sort of became a thing and I sort of made a point of avoiding McDonald's. Which isn't hard because I don't think I am missing much when it comes to the food. 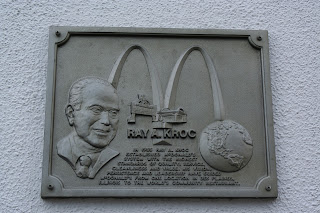 When I was in the Czech Republic I learned that my favorite city (at least from the ones that I experienced) was Pilsen, and there is a McDonald's there.  McDonald's is popular in the Czech Republic because it was started by a guy with Czech parents, Ray Kroc (yes, Kroc is not actually supposed to be pronounced "krok" like the first syllable of crocodile, but "krots", a good, solid Czech name.)  I remember at one point that someone mentioned to me that I could go to McDonald's while I was there, assuming that I wanted to go to McDonald's because I'm American.  But I don't want to eat there.  I just stayed outside and took a photo of the Ray Kroc plaque on the side of the building.  And I am glad that my Czech friends think McDonald's is cool but honestly I think the US of A could be known for something a little better quality than McDonald's food.  And I know that a lot of Americans like to eat at McDonald's when they are abroad because, I guess, it's a form of comfort food to them, something from "home" that they can relate to and know what they are getting.  But I am totally fine with exploring other cuisines.
(P.S. I didn't notice until posting the picture on the blog that the plaque is in English.)

So why don't I eat at McDonald's?  Because it's been so long since I ate at McDonald's.  It's a self-perpetuating thing.  And I guess there is a part of me that wants to be a bit of a snob and be different from what everybody else in America is doing (though that's not really true).  I have to admit that some of their more modern menu items seem more appealing than the classic Big Mac (which, in my my memory, is disgusting) but they have really been advertising the Big Mac lately and I'm also not interested in collecting collectible different-colored Coke glasses or whatever. So maybe in the future I will want something there or be really hungry or be in a small town where McD is the only option and give it a try, but I have a feeling that the McDonald's embargo is going to continue for some time.

That said, this last summer when I passed through Washington, D.C., I visited the National Mall and bought a bottle of water from a cart on the mall.  And after I had placed the order I realized that the person at the cart was wearing a McDonald's uniform.  Apparently McD's has a contract to provide all the food services in the area.  So technically I bought a bottle of water from McDonald's, I guess.  And that doesn't really bother me because there isn't a really good reason for the whole Mickey D's standoff anyway.  But don't expect to see me in there tomorrow.
Posted by ww at 12:28 AM 1 comment: