I was a little frustrated through much of day two until the little glimmer of hope I got near the end, but day three was great. In the morning I tried holding my tongue down while making the "fruit cocktail" face and it was pretty successful. I was able to get some "ring" into my sound by really stretching the cheeks up to lift the velum. In the afternoon we just stood around and mostly listened to each other sing and it was so great to hear such beautiful and pleasant sounds that were coming out of people. Everyone -- everyone -- has made progress. Not only are all the individuals in the group making progress, but we are also happy for each other's progress. On many occasions during the class today we broke out in applause and cheers for our classmates when they got something that they had been trying to do. I'm really excited for day four, but I also wish that the boot camp weren't quite over. I'd like to continue the opportunities to make progress! I finally feel that I'm starting to figure out the basic interactions between breath and the openness of the vocal tract -- I need more time to refine my vowel pronunciation and confirm what I have been practicing.

Tonight the boot camp participants along with participants in some other music conferences at BYU went to Temple Square in Salt Lake City. We attended a rehearsal of the Mormon Tabernacle Choir and we got to sit in the choir seats with the choir and sing along with them a bit. They didn't anticipate as many of us as there were so some of us sat in extra chairs that they put out around the conductor, which actually gave us a pretty good view of things. 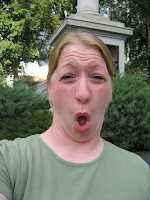 While I was waiting for my friends to show up at Temple Square on the bus, I took a few pictures of myself. This is a portrait of me making the "fruit cocktail" face that I make now when I am singing.

I am so glad that you came to the rehearsal. What a wonderful camp to participate in!