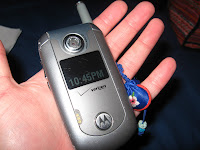 My cell phone. Friend. Music Player. Companion. Umbilicus to the outside world.
So my mom's cell phone is definitely dying. For example, sometimes the screen doesn't work. Therefore, we went to the cell phone store about a week ago to get her a new phone. She decided to wait until next month to get a new phone because she found out that she can get a much better deal plus a rebate if she waits to get a new phone (it's Verizon's New Every Two program or whatever they call it.) So we left the store without a new phone for her...

...but I found out that I can get a new phone in June if I want with the same sort of discount+rebate deal and I have to admit that some of the new phones they have look pretty sweet.

Is my current phone broken? No. Does it function well for everything I've used it for so far? Yes. But when you click on the links you might see why I'm drooling a bit over the possibilities.

The enV is definitely more in my price range -- with the rebate it will be about $80 net cost to me. The Voyager is quite a bit more (to the tune of $200 more, I think) but it is so sweet -- it's like an iPhone but even better because it has a QWERTY keyboard inside. (I actually tried iPod Touch for the first time at the Apple store in New York when I was there a little while ago and I found it somewhat difficult to be able to type using the on-screen keyboard; I kept getting the wrong letter because the on-screen keys were too small or my fingers were too big.) If I understood the cell phone salesman correctly, LG is going to be coming out with an upgraded model of the enV pretty soon...

Not that the Motorola E815 that I have now has anything wrong with it. I'm pretty satisfied with the phone.

Hey!! My New Every Two plan just came up and I upgraded to a LG enV and I love it! Granted, I got it yesterday, but so far it is awesome, I love having the keyboard. And it was only $30 with the New Every Two, plus I ordered it online around three o'clock on Tuesday and it arrived the very next day, shipped over night from Canada for free. Seriously! I had to comment, since I just had the same experience. My enV is orange too, and I love orange so even more happiness, wahoo!