Here's my first ever travelblog! That's because it's the first time I ever went anywhere since I got a blog that was cool enough to blog about. I spent most of the last week in New York City. I came for the TESOL convention, but, as you'll see, I squeezed in quite a bit of fun. 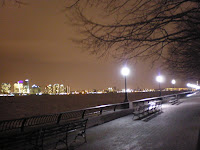 The first night I was there C and I took a walk through the Battery Park area. In this picture you can also see the Hudson and some of the Jersey skyline. 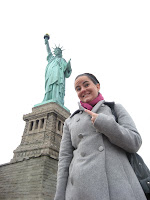 We checked out the Statue of Liberty and Ellis Island. The weather was windy and rainy but we had a great time. 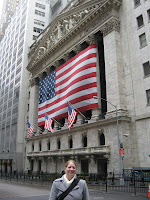 We took a picture of me in front of the New York Stock Exchange for my dad, since he loves the stock market. Also C lives just the next block over from there. 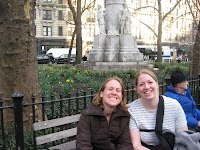 See the man in the blue coat on the right? His name is Claus. After we took this picture in Verdi Square, we talked to him. He told us that he came to New York in 1941 when he was nine years old and now he and his twin brother have apartments in the same building on the upper west side. Such a cool guy. I have to say I was also really impressed with C when we met him, because she obviously really cared for him and wasn't just treating him nice to be patronizing. She said that if someone met her grandfather she hoped people would be nice to him. Thank you so much for being a good example. 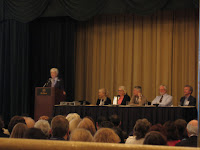 Just to prove that I really did go to TESOL, here's a photo that I took of a panel at the convention. From left to right, we've got Denise Murray, MaryAnn Christison, Kathleen Bailey, David Nunan, Michael McCarthy, and I don't know who the other person is... 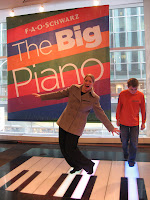 This picture is pretty self explanatory...

Other factoids about my trip:
Chinese restaurants I ate in: 2
Black-and-white cookies eaten: 2
Temple sessions attended: 1 (Manhattan New York temple, so cool!)
Subway trips I took: I didn't count, but maybe about 12
Taxi trips I took: 1 (if it were up to me, it would have been zero, but K didn't want to negotiate the subway with her luggage on the way to Penn station)
Times I put my name into the Wicked lottery: 1
Times I lost the Wicked lottery: 1 (Oh well, there's always next time!)
Floor our hotel room was on: 22
Number of hot dogs eaten: 0 (next time, next time)