Just got back from the eye doctor... 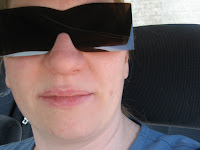 ...and I decided to take some pictures of myself wearing the temporary dark glasses they give you so you won't be blinded because your eyes are dilated.

I was reminded about something I read a long time ago about how women used to use nightshade as a cosmetic. Apparently nightshade causes the eyes to dilate (duh, it's poison) and apparently people's eyes will naturally dilate when they are looking at something they are interested in. So women with the nightshade-dilated eyes would look at men, and the men would think the women were interested, which made the men more interested. Wow.
Posted by ww at 12:07 PM